BIM and Cloud Computing Combine to Build the Crossrail

With the Brexit vote fresh in their minds and the city itself considering secession, Londoners may be feeling a bit uncertain about the future of the economy—especially when it comes to large building projects, which are notorious for going over budget.

This could even be a concern for the Crossrail project, which is one of Europe’s largest in-progress construction projects. The massive railway is intended to alleviate congestion across London, with a high-frequency and high-capacity railway running through 62 mi (100 km) of new tunnels from Reading and Heathrow in the west to Shenfield and Abbey Wood in the east.

Here’s a look at the project:

However, it also happens to serve as a case study for building information modeling (BIM) in Europe as the largest project as yet undertaken—and according to the website, it’s on time and within budget.

The use of BIM on the project is the result of a partnership with Bentley Systems—and recently, Bentley announced that the common data environment (CDE) for the project has officially been moved to the cloud.

BIM: Collaborating on the Cloud

The CDE has been set up on a hybrid cloud-computing platform powered by Microsoft Azure and managed by Bentley’s AssetWise software.

This will assist greatly in managing the engineering and asset information involved in such a large project and will allow project members to see a complete and federated view of the railway in a digital environment. 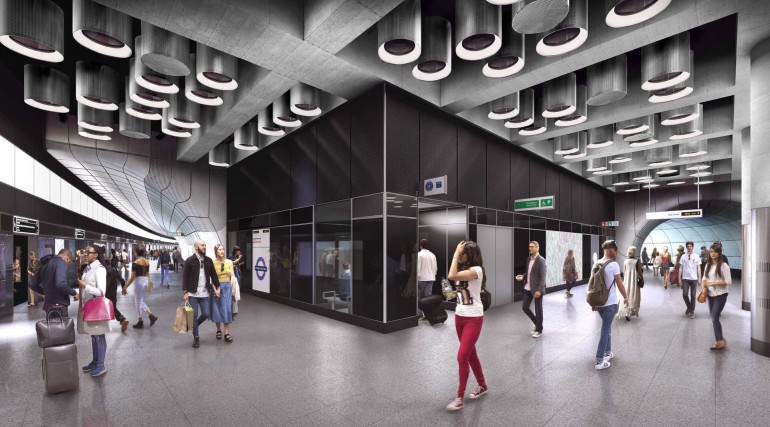 Crossrail is a large-scale railway project aiming to connect Londoners with reliable transit. In some cases, such as the proposed Tottenham Court Road station shown here, Crossrail will unify transit by coexisting with current Underground stations. (Image courtesy of Crossrail.)

“We’re proud of our work together with Bentley Systems,” said David Epp, alliances director for Microsoft. “We are particularly impressed by Crossrail’s groundbreaking ambition in building both a digital and physical railway and are delighted to have had the opportunity to come together with Bentley to address the challenges and requirements of this world-class endeavor.”

The Importance of Going Cloud-Based

Secure cloud-based platforms such as Microsoft Azure have a lot to offer for BIM users. It’s tempting for many to consider BIM as design software alone, but it’s essential to remember that BIM is a process that comes with its own style of workflow.

This type of workflow involves keeping international teams up to speed all the time—so BIM can’t reach its full potential when its information is kept in isolated silos. Keeping this information in a CDE on a cloud-based platform ensures that everyone who needs to access this information can in a real-time and reliable manner.

It’s also worth noting that while this project is being described as a hybrid cloud-computing platform, Azure is one of the big players in the Internet of Things (IoT) right now. Moving the CDE to this platform will be quite advantageous in the later stages of 5D modeling—which typically deals with facilities management—if the plan is to install sensors and the like to incorporate the IoT into managing the massive rail project.

The Crossrail railway project, which will be named the Elizabeth line upon opening, is slated to open for service in December 2018. For more information, check out the Crossrail website.