The Making of a Smart City: Austin, Tex.

Austin, Tex., is one of the finalists in the USDOT’s Smart City Challenge competition, which encourages cities across the country to think about how they can make infrastructure better using Autodesk InfraWorks 360 building information modeling (BIM) software. Recently, the seven finalists submitted their proposals for the city of tomorrow.

Austin, Tex., is one of seven finalists in the USDOT Smart City Challenge.

Austin has a lot going for it in this competition: it’s already a testing ground for the Google Car and Google Fiber and General Motors (GM) has expressed interest in testing out its autonomous cars there as well. The city is also investing in various types of mobility transportation initiatives, including a Bus Rapid Transit, a new bicycle network and Daimler’s Car2Go rental system.

So what does Austin think it takes to make a smart city?

Austin’s proposal centers around one collaborative feature: its Mobility Innovation Center (MIC). This will consist of four components, all of which will work together as the foundation for the Smart City network.

The Two-Way Open Data Portal will be a transportation portal operated by the University of Texas at Austin’s Center for Transportation Research. The proposal explains that this portal will operate using both authoritative and crowd-sourced data—including traffic and transportation information systems, users’ smartphones, private data such as third-party location or schedule data and transit vehicle location systems.

The proposal is also quick to explain that all of this data will be secure and private through the use of anonymization.

The Urban Analytics and Policy Research Center will consist of a team of professionals analyzing the data collected by the aforementioned portal and modeling future impacts on travel demand accordingly. It will essentially be the authoritative body that decides which initiatives to go forward with.

The Regional Operations Management Center will start as a virtual center until a physical building is established. It will consolidate infrastructure management, bringing state-level and municipal-level management under one roof. It will use data from the portal to optimize signal systems, communicate live travel conditions and more. It will also serve as a training and maintenance center to keep the 21st century transit system running smoothly.

The Connected Traveler Initiative will provide real-time, predictive information for travelers, delivery services and the like. It will also serve as the platform for community involvement and feedback.

Autonomous vehicles are the ultimate vision of the future—and the road to a smart city. Austin’s goal is to implement autonomous, connected vehicles to alleviate mobility challenges in the city. These vehicles will be deployed along with an evolving public transit system and biking and walking initiatives “to create a comprehensive network of mobility options within the region.”

Specifically, the city will be looking to Google and Car2Go to help with this particular project as they are already on the ground in Austin.

The city plans to look at implementing these vehicles in all sorts of applications, including as airport shuttles, an on-demand vehicle service for the downtown core, car-share vehicles for urban and suburban areas and delivery vehicles for packages.

Austin hopes to electrify its competition with a detailed plan to bring in high-mileage electric vehicles. Specifically, it hopes to bring them in as alternatives for transportation networks like taxi services, Uber and Lyft, and municipal vehicles—which the city says travel up to 70,000 miles per year.

According to the proposal, “at this mileage, Electric Vehicles (EV) make pure economic sense due to lower operating costs (even with very low gasoline prices). And when these vehicles are eventually automated, we believe they will be cost-effective and convenient enough to start displacing personal vehicles at a very high rate.”

Austin is particularly interested in GM’s investment in Lyft and hopes to deploy large numbers of GM electric vehicles for this part of its proposal.

It’s rather difficult to collect information about transportation without some kind of sensor infrastructure, so naturally sensors play a role in Austin’s Smart City proposal. The plan will allow for public and private partners to work toward improving sensor-based infrastructure in the city.

This will include strategies such as the use of private sector data such as real-time alerts and performance monitoring, installing temperature sensors on the city’s bridges to notify users of icing conditions and extending app-based services to assist the visually impaired community with navigating work zones and other hazardous areas.

Bringing in additional transit options is one thing; getting the people to these options is another thing entirely. To help with this, Austin plans to convert its park-and-ride system into a central hub for a variety of transportation options.

This will involve converting existing facilities into one-stop shops for buses, car sharing, automated taxis and bike sharing alike and will also involve the creation of new facilities at strategic locations. 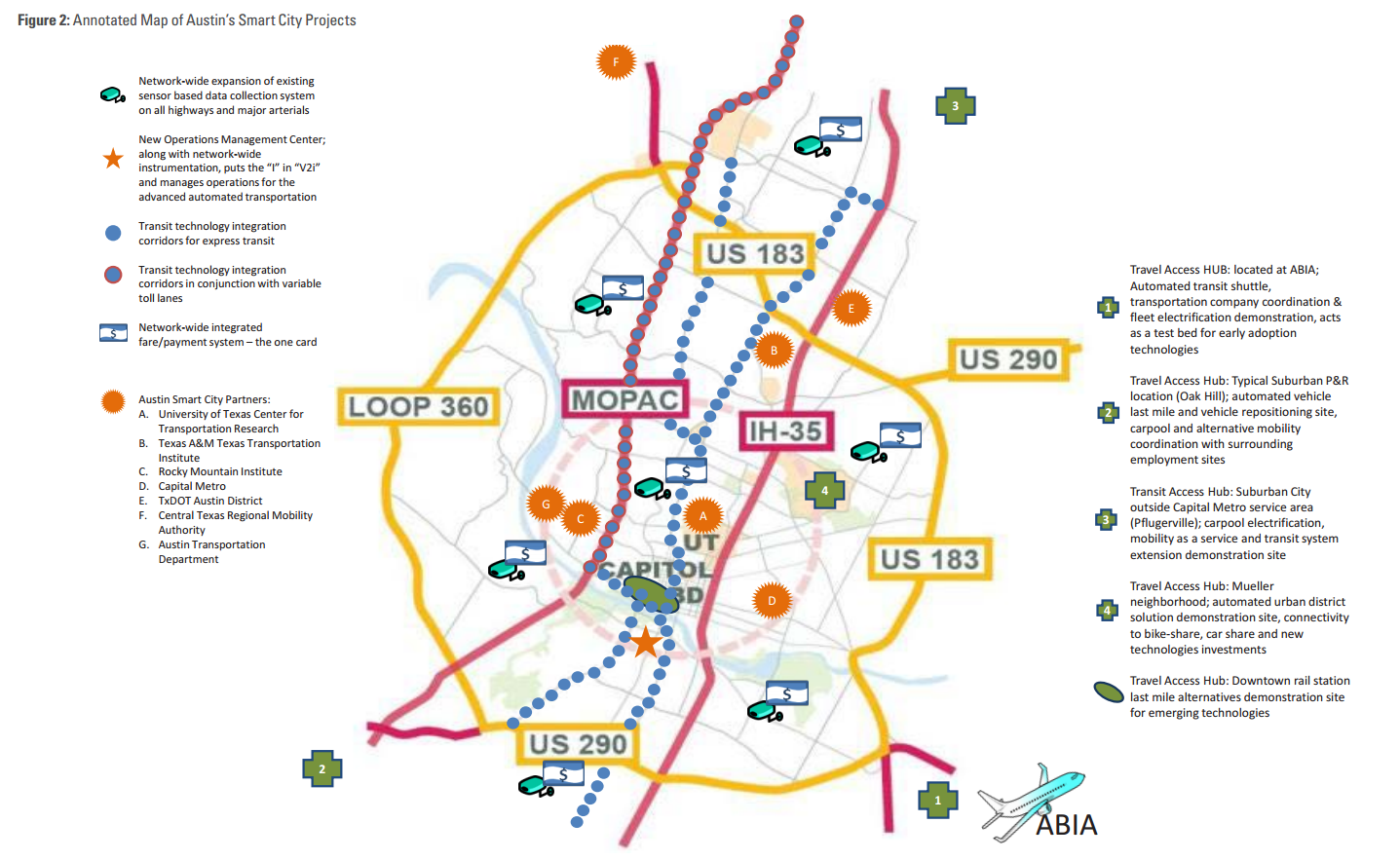 An annotated map of Austin’s proposed Smart City projects. (Image courtesy of the City of Austin.)

Between issues like urban sprawl, traffic and emissions, Austin proves in its proposal that it needs to adjust quickly—and becoming a smart city is a great vision for this city to have.

These efforts, along with a plethora of other details and considerations, hold the potential to help Austin alleviate some of its transportation infrastructure challenges—and this can only be a good thing. After all, the city claims in its proposal that it “routinely rates as one of the most congested cities in the country (with I-35 through Downtown among the very worst freeway segments in the nation).”

For more information, check out the full proposal for Austin, Tex. and the Smart City Challenge.