Augmented Reality (AR) is a hot topic—and there’s a good reason for that. The technology has the potential to revolutionize all kinds of fields, from employee training to machine maintenance and even the way we build our cities.

Yet despite all the neat headsets being released to the market, AR is not a perfect technology. There are still many things that need improvement. We sat down with Stéphane Côté, research director at building information modeling (BIM) software developer Bentley Systems’ Applied Research group, to talk about some of these issues keeping AR out of our construction sites.

The research group at Bentley has been working on AR for quite some time—nine years, to be precise—and it certainly has a unique way of going about it. There wasn’t much available in terms of AR headsets at that time, so the team used two webcams, an orientation sensor, a pair of goggles and some duct tape to create its own AR system.

A view of the Bentley team’s augmented reality headset, demonstrating the plotting of a new cabinet. (Image courtesy of Bentley Systems.)

This MacGyvered system enabled the team to understand the advantages of AR in construction as well as some of the problems with it. With so many affordable headsets reaching the market nowadays, it’s important to look at AR and consider what it can and can’t do for AEC.

AR has oodles of potential uses in the AEC industry. It can be used to demonstrate potential design options in the context of the real world or to supplant the need for construction workers to measure every little detail prior to installation. These “magic glasses,” as Côté called them, could be serious time-savers.

However, making mistakes in construction can be devastatingly expensive and if your information isn’t flawlessly accurate, you could be signing yourself up for a lot of trouble.

Côté used the example of a system that lets the user “see” through surfaces to locate infrastructure features like underground pipes. 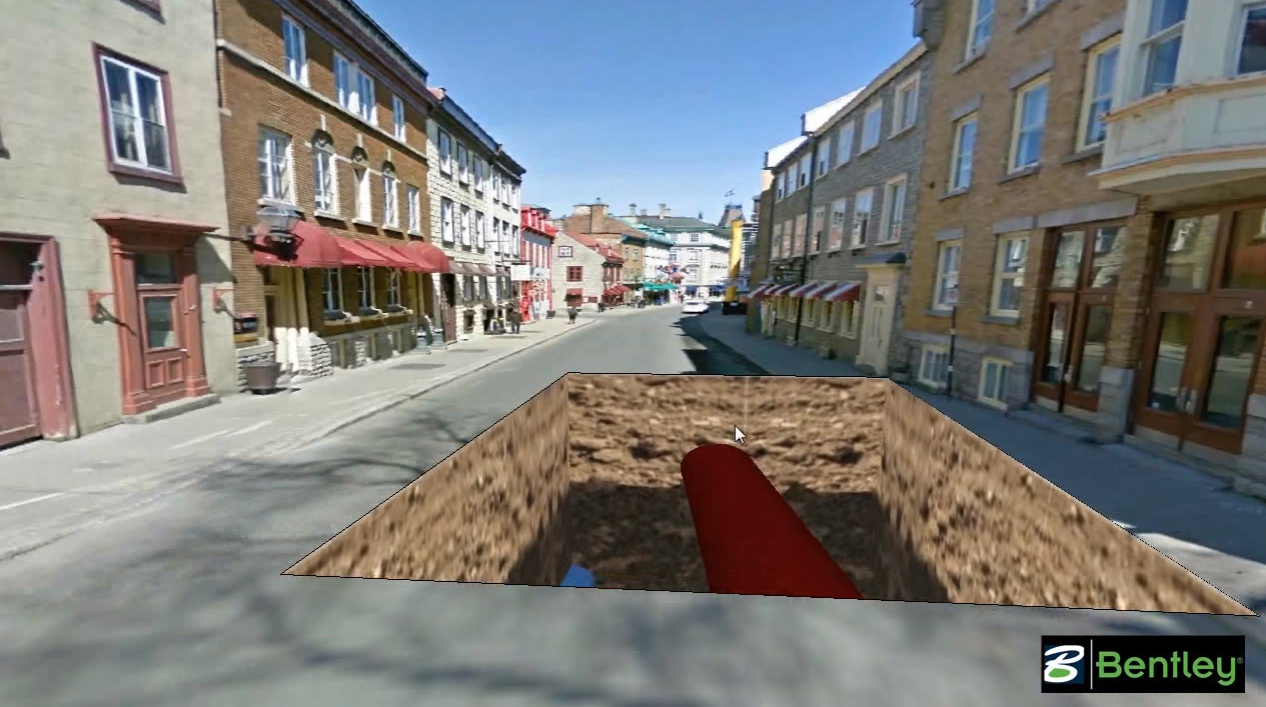 The research group’s work with AR included a project to “see” through a city street to the infrastructure below. (Image courtesy of Bentley Systems.)

“Let’s say the [AR] system displays the location of a pipe and the builders rely on that,” Côté hypothesized. “They start digging, they hit the pipe, and they have to evacuate the entire area. That is extremely expensive and they were misled because of the AR system.”

“It’s extremely important that the user of this [AR] system can rely on what he’s seeing,” Côté continued. “If it’s just a cool tool that displays something floating in the air but the user can’t rely on it for his work, he will just stop using it.”

So what’s the solution?

“We have to [somehow] find a way to display the information to the user in such a way that he knows what he can rely on,” Côté explained. “For instance, it could be a color code. If the pipe is green, it could mean ‘Yes, that’s fine, you can rely on that. We surveyed that pipe last year, it is exactly at that location.’ If the pipe is red, it could mean ‘Okay, that pipe is that street, that’s all we know. It could be anywhere.’”

Until a solution is found, inaccurate information will certainly play a role in preventing mass adoption of AR on construction sites—and that brings up another issue.

Once we get information accuracy up to snuff, there’s something else we’ll need to consider: dynamic work environments.

No active construction site sits inert. They’re places of constant movement, with workers buzzing around like bees trying to get the job finished as efficiently as possible. AR technology at this point is unfortunately best suited to static environments.

“Most of the time, augmented reality relies on the fact that the augmentation that you’re doing is on a static environment,” Côté explained. “For instance, say you have an office and you augment the office with a new wall or window. Of course it works well because the cameras that are installed on the headset will capture the scene and that scene doesn’t move—so the features that these cameras will detect are fixed.”

“If the room is changing, [for example] on a construction site and you don’t only have new walls being added but people carrying equipment and material, then the scene changes and the system has to rely on something that keeps changing,” said Côté. “I know researchers are working on that problem.”

There has been some progress on this front, especially in the context of testing AR in gaming environments, but it hasn’t yet reached a level of reliability for high-stakes construction sites.

Another aspect of AR systems that still requires more research is headset design. If you look at the HoloLens, for example, you see a large set of goggles that obscure part of your face and peripheral vision.

“We put a lot of importance on those nice headsets that enable you to view the world augmented, but as soon as you put something on your head, you block the view a little,” Côté explained. “As soon as you displace something in front of you, you don’t see what’s behind that augmentation.”

“Those things that you’re masking either on the side or behind the augmentation can be a safety issue,” Côté continued. “There may be a vehicle coming toward you or someone could be about to hit you with a piece of material.”

“We would like AR to improve safety on building sites and not decrease it, so somehow these augmentations will have to integrate well with the type of work being done and the type of equipment and type of clothes being worn so that it’s useful and not a threat,” said Côté.

There has been some work in this direction, including designs like AR contact lenses for bionic vision, but these designs will need to become fully realized before augmented reality is accepted on job sites.