Why BIM Education Needs Another Look

Building information modeling (BIM) is quickly becoming a universal tool. It’s used by architects, engineers and facility managers across the globe and is mandated in countries such as Australia, Brazil, China, Germany and the UK.

However, there’s one universal issue when it comes to BIM: a lack of consistency in education.

The Issue of BIM and Its Uses

There’s a substantial discrepancy between how BIM is used in different countries and sometimes even different industries. For example, take a look at the U.S. and the UK. Both countries are relatively large BIM markets, but use the concept for very different purposes.

“A lot of BIM in the U.S. is primarily focused on visualization and clash detection, whereas in other countries, most notably the UK, they are really looking at the issue in a much broader scale, with many more functions that BIM can perform,” said Deke Smith, a consultant for the Academic Interoperability Coalition (AIC), one of the groups working to alleviate this discrepancy in international BIM education.

“Our educational program has, up to this point, really only implemented a few of those 40,” Smith said of BIM education in the U.S.

So what’s the solution?

The AIC was founded by the buildingSMART alliance and the BIMForum. It incorporates 53 universities from the U.S. and abroad with the common mission of coming to a consensus about BIM education.

The first step toward collaborative education took place at the 9th BIM Academic Symposium in 2016 and was reported as nearing completion at the 10th symposium held at the University of Florida in early April 2016. This gathering brought together academics from participating universities to present papers and identify a basis for curriculum development.

“The idea there was, ‘Okay, what should we be teaching when we talk about BIM?’” explained Smith. To settle this issue, the AIC called for an anonymous committee of subject matter experts to deliberate using the Delphi method, deciding on necessary points in education and testing them in the field in order to build a consensus. 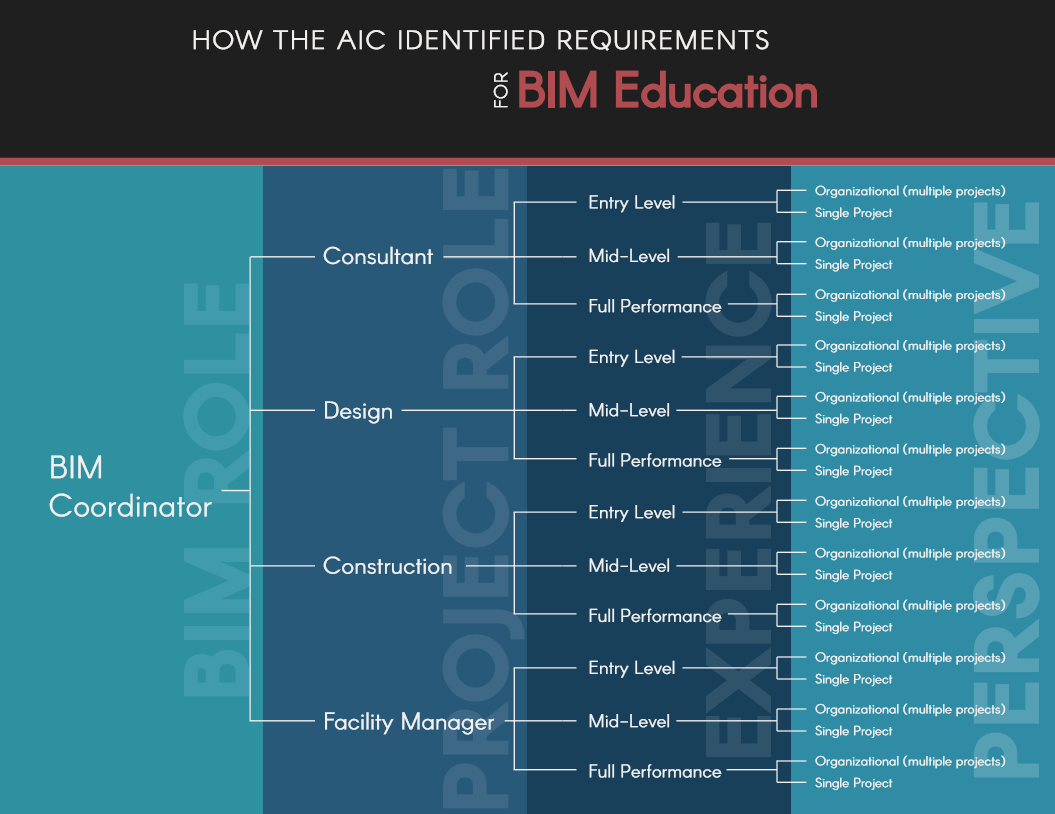 This is the process used to identify areas of need in BIM education. This process was repeated for BIM planners, BIM managers and BIM users, resulting in 96 categories for consideration.

“The first list [of necessary points] was actually made by the academics—the professors,” said Smith. “Then we went out to the practitioners; they validated the list and are coming to consensus.”

Once a final list is made, according to Smith, it will be sent out for public review for 30 to 60 days. After that, it will be sent back to the universities so that they can develop appropriate curricula.

One particular issue facing BIM education is that of credentialing, according to Smith.

“One of the biggest problems is that somebody only teaches the items that are going to be tested,” Smith explained. This style of education results in what Smith called “training,” where students are taught how to use a certain type of software and are not necessarily given a “true education” of what BIM is and what it can do.

This issue is particularly troublesome because, in many cases, it can result in students needing to be retrained shortly after graduation.

Smith illustrated his point by comparing this issue to that of energy credentialing. In that industry, there are numerous credentials, making it difficult to identify which are actually valuable. The approach in that case was to use the ANSI credentialing process, known for being strict and well-organized, to regulate energy credentialing.

The hope is that the AIC will be able to create a similar process to enforce a more functional level of education in BIM.

“Ultimately, this is the purpose of the whole effort—for credentialing BIM users in the future,” Smith explained. It’s not a complete solution, but the coordination effort will help with the issue of students being trained rather than educated for their fields.

For more information and to stay updated on the effort, check out the University of Florida’s BIM Education webpage.